One of the most recent large-scale modifications to the traffic infrastructure in Linz was the enclosure of the municipal autobahn traversing the Bindermichl and Spallerhof districts. Since 2005 tunnels have been confining the flow of traffic, enabling nearby residents to look out upon the greenery of the newly created landscaped park. Amidst this constructed idyllic scene a temporary structure is being erected: BELLEVUE – Beautiful View, a house at the rim of the Mühlkreis autobahn. To the one side a view of the never-resting autobahn emerges, on the other a sweeping view of the park. Reflecting the proportions of the surrounding residential buildings, the monochrome yellow structure embodies a protective shell for the functions it harbors, housing quarters for guest artists, an info kiosk, a cafeteria with terrace, bicycle rental, working space, exhibition space, a media room, a library, and a public stage. 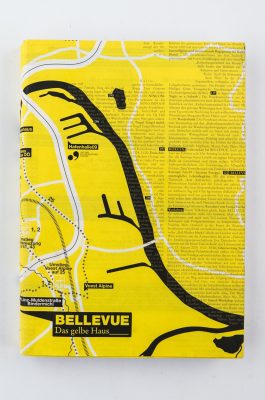