It was one of the most important filmic finds of recent years—when in 2016 the Filmarchiv Austria was able to announce the rediscovery of the previously missing parts of the Austrian silent film THE CITY WITHOUT JEWS (originally titled DIE STADT OHNE JUDEN), it sparked a strong global media response. After all, this 1924 production, filmed in Vienna after a novel by Hugo Bettauer, is considered to be a classic anti-utopia and the first art-film statement against anti-Semitism. Thanks to a successful crowdfunding initiative, Filmarchiv Austria was able to fund the sorely needed restoration work. Just in time for the 100-year anniversary of the Austrian Republic in 2018, THE CITY WITHOUT JEWS once again exists in its nearly complete original form.

Today this film represents not only a central component of Austria’s cinema heritage, but it is also a unique document of that time in history—created during the First Republic, yet with explicit allusions to the present. The Filmarchiv Austria thus decided to newly localize THE CITY WITHOUT JEWS as an audiovisual sound box for the history of Austria between 1918 and 1938 in the medium of the exhibition. Moreover, well-known curators Andreas Brunner, Barbara Staudinger, and Hannes Sulzenbacher agreed to work on this project. Instead of a cinema-historical exhibition, what emerged was a show that critically illuminates, during the year marking the republic’s centennial, issues related to the cultural identity of Austria with all of its fissures and distortions. “Die Stadt ohne Juden” was the name chosen by Hugo Bettauer for his 1922 novel, which detailed what at the time was still a utopian idea of banishing Jews from Vienna. In 1924, the filming by director Hans Karl Breslauer was already accompanied by heckling on the part of National Socialists, and in 1925 Bettauer was shot by a National Socialist. The rise of the NSDAP in Austria by means of terror resulted in the so-called “Anschluss” or annexation in 1938. This juncture was followed by the expulsion and murder of Central European Jews during the Holocaust. Today, Bettauer’s satire is thus read as the prophecy that it never actually was.

In the exhibition THE CITY WITHOUT, the film provides the historical framework. Based on individual scenes, it examines the mechanisms of exclusion playing out in society at that time and also today. In the process, it traces the stages of exclusion from the polarization of society to the final elimination of those serving as scapegoats. This development is not only described for the 1920s and 1930s, during which time the anti-Semites called for the exclusion of Jews, but also for the present, where such campaigns are on the rise again: against foreigners, Muslims, or refugees. THE CITY WITHOUT thus poses the question of how and to what extent the polarization of society during the ascent of National Socialism can, should, or must be compared to our present day.
While in the film the Jews returned to Vienna, the real-life historical reality told a different story. The exhibition moves from Bettauer’s filmic utopia to the actual historical ramifications of the expulsion of Jews, the Shoah. With its links to the present, THE CITY WITHOUT is conceived not only as a historical exhibition, but also as a contribution to questioning societal dynamics today as well.

An exhibition on the occasion of the centenary of the republic 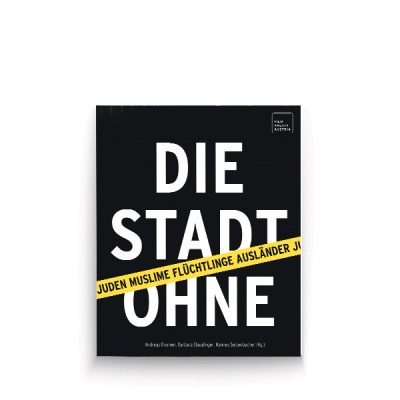