Wilhelm Thöny, one of the most important Austrian painters of the Interwar period, volunteered for military service one year after the outbreak of the First World War. At times soberly and melancholically, at others dramatically staged, the works he created serving in the Dreier-Schützen regiment from Graz tell us of heroes of the war, “enemies of Germany”, battles, and the ordinariness of army life. Thöny’s paintings of the war are part of the representative facade which had to be erected and maintained to address the dubious legitimacy of the war and the defeats on the front line.

Involving military history expertise, Thöny’s paintings are iconographically decoded and confronted with the terror of the “Storms of Steel” in this exhibition. What manifests in this is the discrepancy between Thöny’s affirmative works serving both patriotic propaganda and his personal survival, his personal war traumata, and pacifist perspectives on that time, which he would refer to as “these idiotic years of doom” after the world war. 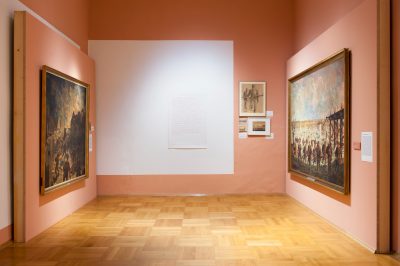