Based on historical and present-day examples, this exhibition shows how heightened political polarization can lead to division and to the ultimate exclusion of individual groups from mainstream society. Serving as the point of departure for the exhibition was the filmic adaptation of the novel Die Stadt ohne Juden (The City without Jews) from 1924. Individual scenes from the film visualize the gradual marginalization of the Jewish population during the rise and establishment of the Nazi movement in the 1920s and 1930s. Supplemented by a view of current developments, both history and the present are placed into relation to each other.

About the design:  The continual process of exclusion is made visible in the exhibition architecture through changing wall modules. Depending on the content of each section, the freestanding modules take different forms: from the most open and “light” structure, which stands for the first stage of polarization, to the most narrow and “heavy” structure, which represents the last stage of exclusion. Spatial perception is impacted by the incremental changes in the sinking height of passage and the simultaneous ever-growing width of the space above. In order to pass through the final structures, the exhibition visitors must either bend down or take a small detour.

The proportions of the modules were strongly inspired by the work of Katarzyna Kobro, a Polish sculptor with German-Latvian and Russian roots. Due to her origins, Kobro was forced to weather the war in exile and lost most of her sculptures, which were tossed onto scrap piles by the occupying forces. Although very few of her works have survived to this day, Kobro is without doubt one of the key protagonists of the avant-garde movement in Central Europe. Her spatial compositions, founded on the rhythm of space and time, are considered to be a functional model of social life.

To balance out the complex forms described above, straightforward and natural materials were selected for the exhibition, not least with the aim of partially counteracting the usual cool aesthetics of exhibitions about the period of National Socialism. Untreated birch wood surfaces in combination with wool felt were designed to give visitors a pleasant spatial experience, yet without allowing a sense of comfort to arise. The intention behind the selection of materials, and the contrast engendered in the process, was to allow visitors to more easily stomach the content explored in the exhibition. 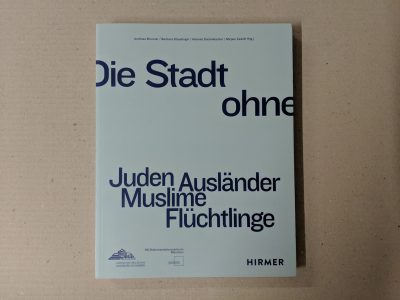 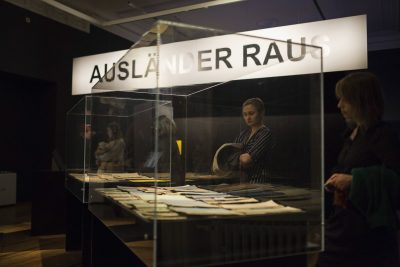 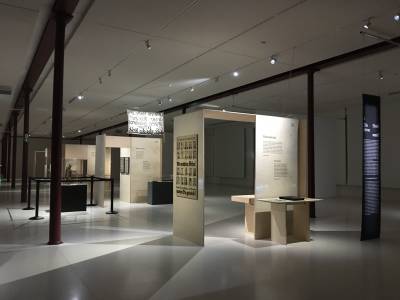